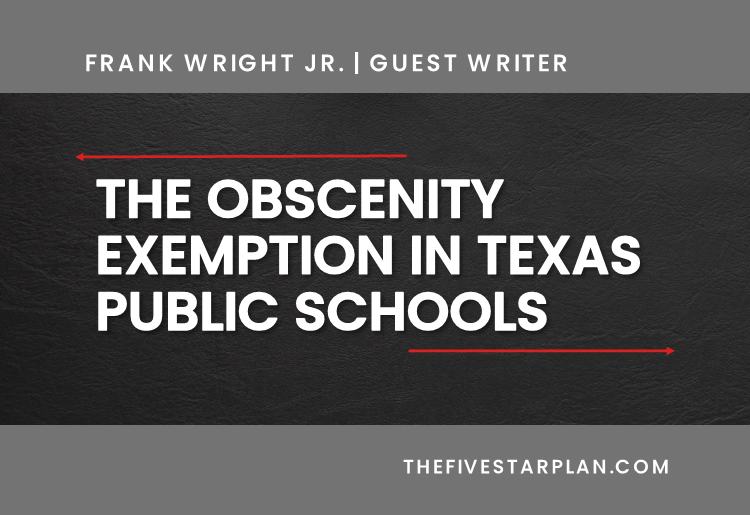 I have been working for several months to convince my local Independent School District (ISD) that a specific classroom library book should be removed because it is inappropriate for instructional material in a school.

You would think that it would be an easy decision for a small-town in NE Texas ISD to remove a book as highly inappropriate as this, but you would be wrong.

I've learned a lot during this process. At first, there were teachers in this ISD telling me that no such book was in their school.

Then teachers were telling me that students who may have been the victim of rape or pedophilia in this ISD need this book in order to be able to better cope. The truth is that the crimes of rape and pedophilia committed against children in this book are told from the criminal's point of view, and the crimes are then justified by the author.

A young girl that has been the victim of rape or pedophilia who reads this book will not be comforted, or better able to cope; she will read that the perpetrator was actually showing his love for her. I know this because I found the book in my public library and read it in its entirety before I made the initial request to have it removed from the school.

I recently made the final appeal to the school board to remove this clearly inappropriate book. During the appeal, a copy of Texas Governor Greg Abbott's letter to the Texas Association of School Boards was included. This letter was a call to action for Texas public schools to determine the extent to which inappropriate, obscene and/or pornographic materials exist in our schools. It also included a statement of the collective obligation that these organizations and their members are required to remove any such material; this was given to the administration for a fourth time.

A copy of the T.E.A. response letter to Gov. Greg Abbott states that a model local school board policy has been developed in response to his call to action. This would also address the issue of inappropriate and obscene content that may be found in Texas public school libraries.

Both state law and school policy already give school administrator's significant discretion to determine the content of the school libraries. In fact, pervasive vulgarity and educational suitability are specifically stated as justifications for removal of a book in question.

Gov Abbott's letter, and TEA's response letters are wake-up calls to our schools governing bodies that the issue of inappropriate reading materials in Texas school libraries needs to be given higher priority, but it has unfortunately fallen on deaf ears in many ISD's including mine.

To be fair, the ISD has repeatedly told me that only an excerpt from the book is used, and that the book is kept locked up so that students don't really have access to the full novel. The use of an excerpt, however, is an endorsement of the book itself. Keeping it locked up in a classroom library is perhaps an enticement for students to continue with further reading.

I've also learned that the United States of America has a federal penal code addressing obscenity. Including Title 18 Chapter 71 which criminalizes the transfer of obscene materials to minors. BUT 43 states (including Texas) have OBSCENITY EXEMPTIONS.

In Texas, Sec 43.24(c) is where the obscenity exemption can be found. This loophole allows public schools to provide obscene materials to minors under the guise of "education.”

I would probably be arrested if I gave my neighbor's child the very same inappropriate book that can be found in some Texas public schools. I wonder if my ISD's repeated decisions to keep this clearly inappropriate and pro-pedophilia book would have been any different if they didn't have the prosecutorial immunity provided by the current obscenity exemption.

Texas Senator Bob Hall (District 2) authored SB 977 in the recent 87th Legislative Session which would have repealed the obscenity exemption, but the Bill died.

Senator Hall and the Texas Freedom Coalition are champions of the effort to call attention to and stop the sexualization of our children. This includes Texas public schools and I applaud them for this effort to protect children.

Perhaps there will be some progress to begin closing this loophole at the Texas Republican Party Convention in Houston June 16 - 18.

Either way, please contact your Texas Senator and House Representative and ask them to support a repeal of the obscenity exemption in the next Legislative Session.

There is certainly no guarantee that it would fully resolve this issue and the seven states that don't have an obscenity exemption, still have issues with inappropriate materials in their schools.  Reaching out would however, be a logical and responsible first step.