The Importance of Paper Candidates 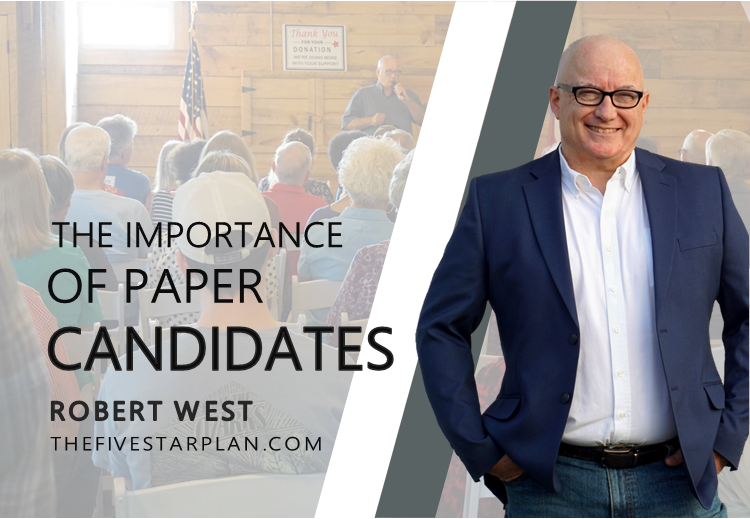 Do you know what a paper candidate is and how important they are to the future of your state?

I want every Texan reading this to check the “Candidates” section on my website to see if your House District has a candidate endorsed by The Five Star Plan.

If there is not already a “five-star” running and you’re not happy with the selections you currently have then become a paper candidate.

Paperwork to Run and Signatures

Get the paperwork to become a state representative and the forms to gather signatures. There is a $750 filing fee but don’t pay it, instead gather those 500 signatures.

500 signatures sound like a lot but a Walmart supercenter can get 11,000 customers in a day between the hours of 11AM to 1PM and 7PM to 9PM.

Once you have the signatures, turn them in and do nothing, you are a paper candidate.

If you really want to go a bit further put up a FB page or a free website.

How does a Paper Candidate Help your State?

So, what does this do for your state?

Let’s use the first 10 Texas State House Districts as an example.

Say that TFSP has candidates actually running in five of those districts that are in it to win it. The establishment types can send a lot of money to those five districts to help defeat the challengers.

Career politicians in the other five districts can show up, donate or even lend volunteers.   The last thing these career politicians want is to see regular people winning elections, it might encourage others to run against them the next time around.

This is where the paper candidates come in.

As a registered challenger these previously safe politicians are less likely to help their friends. After all, they can never be sure that you are not quietly gaining support and they will have to use all or most of their energy to make sure they don't get replaced.

Even if you tell people that you are a paper candidate, these people may not believe it 100%. Liars are not the most trusting of souls, they think other people are pretty much like themselves.

So now, instead of 5 challengers going up against 10 candidates the odds just got a lot more even for the challengers.

They are still facing incumbents but at least the five with paper candidates will not throw everything they have into helping the other incumbents and for understandable reasons.

Next up is the Greg Abbott Machine.  Whatever Abbott is selling to raise $60 million in campaign donations, it is costing you a lot more.

When Drew Springer was running for state house and state senate at the same time in 2020, Abbott threw 1 to 3 million dollars his way.

This was for a special election that would only get Springer in the Senate for one session. Springer also had BLM types out block walking for him during this special election so neither side wanted an actual conservative to hold office in Texas.

Why am I bringing up all of Abbott’s campaign money?

The reason many great people do not stand up and run is that Abbott can squash them with donations to the incumbent.

Abbott has his own worries this primary season. Sure, he could spare a few million for one crony that needed his help but 181?

Abbott is concerned about Abbott more than his allies. He could not give to one without upsetting the others and he could not give enough to 181 to really make a difference.

Here is your chance. It is a piece of paperwork and 500 signatures. If you do this let me know and your endorsement can go on the website; I might even show up at your events.