How To Become A Five Star Candidate 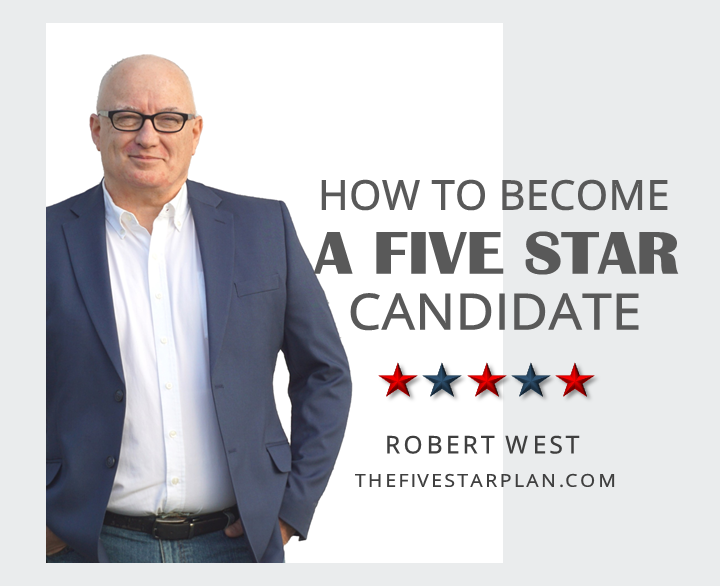 When I wrote TFSP book, I mentioned there would be Five Star candidates. I had no idea who these people would be...

The Five Star Plan is seeking to energize 5 million voters and run an entire new slate of citizen legislators in the 2022 Primary.

If you're running for office, you must get started now.

TFSP teaches the voter how to take politics from career politicians and give it to patriots.

I knew this would be difficult for people to embrace because, like any plan, there are steps to reaching a goal.

The first step would be for people to admit they've been fooled.

The reason con men and politicians have such long careers is that it's easier to trick someone than to get them to admit they’ve been tricked.

The bigger the lie, the longer the con, the harder it is to get people to step forward and say “I was an Idiot.”

Folks, I freely admit, I was an idiot... I voted for Greg Abbott and supported him right up to the beginning of 2020.

TFSP can endorse more than one candidate in the Primary.  Keep reading if you want to be a five star candidate.

How the Five Star Plan Endorses a Candidate

There are avenues to follow before TFSP will endorse. This is true for all 2022 candidates in Texas but let’s use governor as the example.

For Statewide Candidates who agree with The Five Star Plan I will share that interview on the blog.  Their book review with photo will also be placed on the website.

For all other 2022 Primary Candidates, this includes the House, Senate, etc. their information will be linked through Resources, or in the links below.

Five Star Candidates are invited to write a guest blog post to announce their candidacy.  We'll include a Five Star Endorsement graphic so we can market online and bring attention to your campaign.

All it means is that they agree with The Five Star Plan and have done nothing that would keep me from voting for them.

I have been in communication with the three Republican challengers to Greg Abbott and have spoken with two more that might run.

All five are fine men but to date only Don Huffines and Chad Prather have spoken with me, agreed to the legislative priorities and provided a review.

My wife and I contributed to all three announced challengers and urge everyone that opposes Abbott to do the same.

No matter which challenger you support, they all bring unique voters to the polls and the more voters in the primary, the less chance Abbott has of getting 50% to avoid a runoff.

If it comes down to Abbott and any of these men, I will be voting against Abbott and I urge you to do the same.

This information is to help show everyone that just because you think one candidate is best, it does not mean the others are bad.

We need to keep our eye on the ball and admit than any challenger thus far is better than Abbott.  ABA - Anybody But Abbott.

With that in mind don't forget the Five Star Plan Goals...

and Run a New Slate of Citizen Legislators...