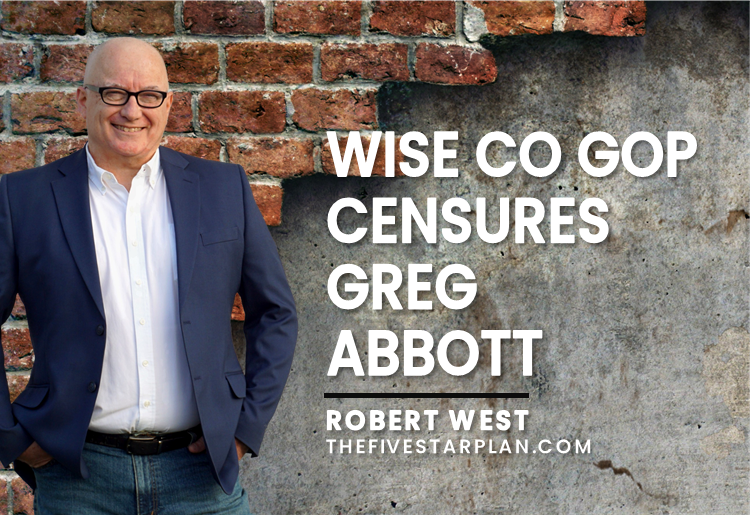 On the evening of Jan 11th, the GOP Executive Committee of Wise County, Texas voted unanimously to pass a censure of Republican Governor, Greg Abbott.

For those that don’t know, a “censure” is just a formal word that calls out an elected official for doing something wrong. Once passed by a county GOP it means they do not consider that person a member of the party any longer, at least not within that county.

The censure lists the reasons, in this case violating the “Separation of Powers” in the Texas Constitution Article 2, a paragraph that says in essence that one man cannot write the law, enforce the law and tell judges how to rule on the law.

Closing or limiting churches, businesses and public gatherings are among the 17 or so violations and you can see the whole list, along with a timeline on the resources page.

The First County to Censure Abbott

Wise County is not the first GOP County to censure Greg Abbott, they are the 15th.

Harrison County, led by County Chair, Lee Lester, holds that distinction. In fact, Harrison County was the first County GOP in the history of Texas to censure a sitting governor of their own party.

For the patriots of Wise County though this censure started at around the same time as Harrison County, it just took longer and other things had to be done first.

Wise County Conservatives is a group that was started to educate voters and promote conservative values. Like many of these conservative groups, they had voted for Republican candidates and wanted to help the GOP maintain or even gain ground in State and National elections.

Many conservative clubs and organizations see themselves along the lines as cheerleaders or helpers to the Republican Party but often they are not welcomed or respected by their local GOP.

Some members, when faced with the resistance of establishment Republicans, even toyed with the idea of starting their own political party.

Someone pointed out that more than half of the Precinct Chairs in Wise County sat empty at the time. For those of you that don’t know, precinct chairs actually run the county GOP.

Wise County Conservatives could simply volunteer to fill those empty seats and assume control with that majority.

Step one was to find real conservatives more concerned with preserving the constitution than anything else.

Texas has a high percentage of veterans; these men and women have already put their lives on the line to preserve that constitution. Many current service members have relatives that stepped forward to honor that service.

Getting those volunteers appointed to those seats was another matter and that required getting the Republican State Chair, Matt Renaldi involved.

Like so many other places in Texas, voters have taken control of their county GOP with an overwhelming majority.

The vote to censure Greg Abbott was the result of regular voters being fed up with politics as usual and doing something about it. This was not quick; it was not easy and it is not the last step but it does show what is possible.

There are many other counties around Texas where regular people are filling out the application to run for Precinct Chair. In many places they have never seen a contested precinct chair race, they are seeing candidates sign up for every single position.

Unless you are happy with how things are going then you should contact your precinct chair, if you have one because about a 1/3rd sit empty.

The precinct chair position is an unpaid position but it is the only position where the people’s votes are worth the same today as they were when we started.

You see, voting precincts contain between 100 to 5,000 registered voters and we add precincts after each census.

This means that you can run for this position by talking to the voters in your area. You don’t need to raise money and you can instead focus on doing the right thing.

Remember to open your welcome email

In too many instances these county committees have become social clubs and the chairs have forgotten that they are to "represent" their friends, family, neighbors and the people that voted them into that position more than the party.

In precincts with an active chair, you will know them because they block walk and organize to get out the vote. An active precinct chair can increase voter turnout by 20 to 30%.

While we are on the subject of people forgetting their responsibilities and maybe even their honor, let me call out the news organizations across Texas for a moment.

When Harrison County and five other counties passed the censure of Greg Abbott every major news organization in Texas ran a story but that coverage stopped completely in July of last year.

It was a huge story when five or six counties censured Governor Abbott. Nothing since then has been reported, despite the number climbing to 15, with other counties still trying to get this done.

Five Things You Can do

With that in mind, I am asking five things from everyone who reads this.

The Republican Party of Texas looks better when you’re staring at it in the mirror instead of the sidelines. 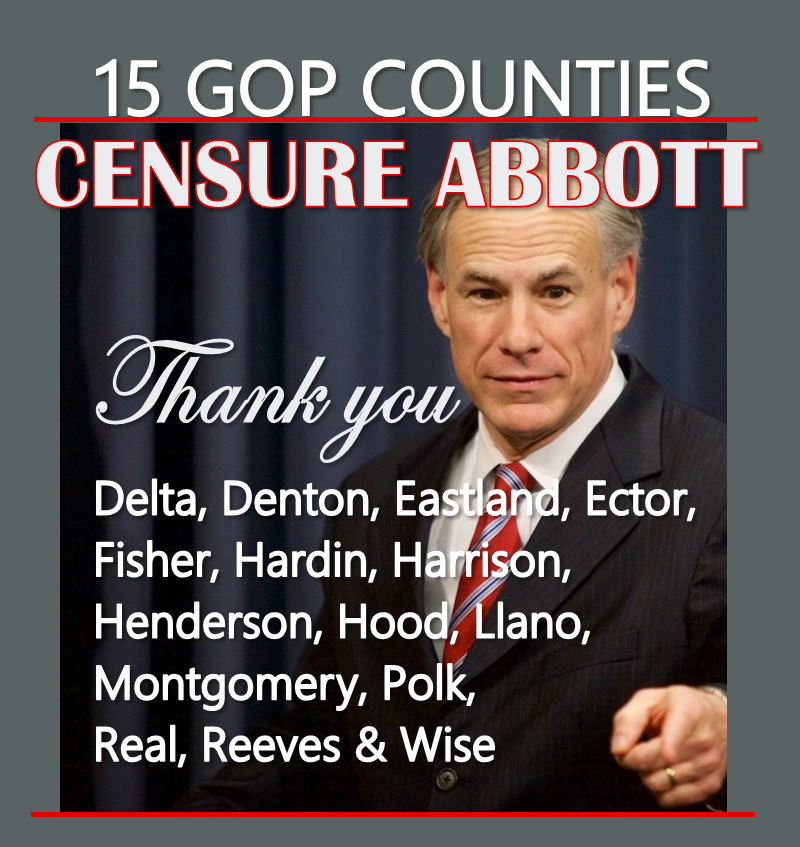