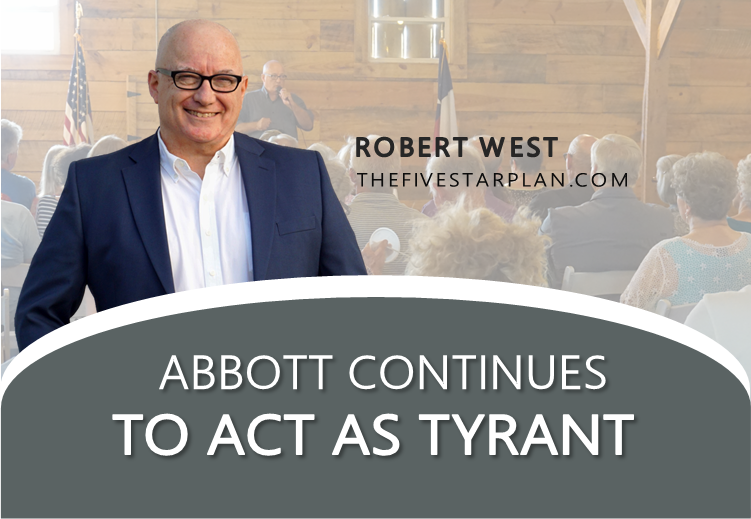 On Wednesday, June 16th Greg Abbott announced that he would be spending 250 million dollars of taxpayer’s money to “hire a project manager and a contractor.”

This was done to start building the "Texas Border Wall."

Note that this imperial decree was announced after our elected representatives were out of session.  A similar amount was spent on contact tracing before the legislative session.

No matter what you think about the goal of each expenditure, the governor of Texas does not have this authority.  It is unconstitutional and above illegal.

During 2020, we learned that the Texas State Legislature was filled with cowards and cronies.

Under the Texas Constitution, with a simple majority, they can call themselves into special session.  Did you know that under 665, they can head to Austin and consider impeachment of an out of control governor?

Our state legislatures didn’t do this prior to the 2021 session, they failed to put a stop to it while in session and will do nothing now to protect and defend the Texas Constitution and your rights.

While Democratic voters are busy cheering executive overreach in the White House, like the shutdown of the Keystone Pipeline costing American Jobs.

Republican voters are busy cheering Abbott’s executive overreach in Austin that they think will give us a border wall.

Stop for a Minute and Think

Folks, stop for a minute and think about it.  Does it make a difference if a thief, a tyrant and a liar is stealing from you or for you?

If Democrats are willing to reelect Biden after seizing power, he has no right to while his cronies in Congress and the cowards in the courts ignore it, they are idiots.

If Republicans support Abbott while he spends money, he has no right to while his cronies in The Texas House and in the Texas, courts ignore it, then they are also idiots.

Democrat and Republican voters are both having their rights trampled and they are too busy checking the color of each other's team jerseys to do anything about it.

Once it becomes clear that the President and the Governor can do anything they want, how long before what they want is not what you want?

Will you support the same king-like power when the “other” party is in power?

The voters need to start thinking about hanging together or, in the near future, we will surely hang apart.

HOW TO CENSURE ABBOTT PDF

"What can we do?"  There’s that question again and why I wrote my book, The Five Star Plan.

“The governor of Texas is a very powerful person,” Patrick said this at a Capitol news conference, ramping up his days-long campaign to get Abbott to intervene.

“He can do anything he wants.” -Lt. Gov. Dan Patrick

For Democrats you can demand that your elected representatives call out the Republican governor of Texas on his BS.

If your party refuses to act you will know how much they care about you and your rights.

If they chose to allow this in order to help win the next governor election then you know they care more about power than rights.

For Republicans? There’s an easier approach to deal with an elected tyrant. Contact your County GOP Chair and demand a vote to censure Greg Abbott.

Set a deadline for the vote and the announcement of June 30th, the day Abbott and Trump are to visit the Southern Border.

If those County Chairs refuse you can change that leadership in the next election. Sometimes if you want it done right, you have to do it yourself and TFSP book will walk you through those steps.

Abbott is only going out in public because he thinks no Republican will boo him if he is with Trump. Expect to hear any cheers for Trump, be cheers for Abbott.

Any boo’s will be discounted as Democrats or “Anti-Trump” Republicans.

If you are attending the June 30th Trump Train event, make sure you have your “Pro Trump, Anti-Abbott” flags flying. That way you neither endorse a dictator nor insult a patriot.

Make it hard for the media to spin the message, because there will be images.