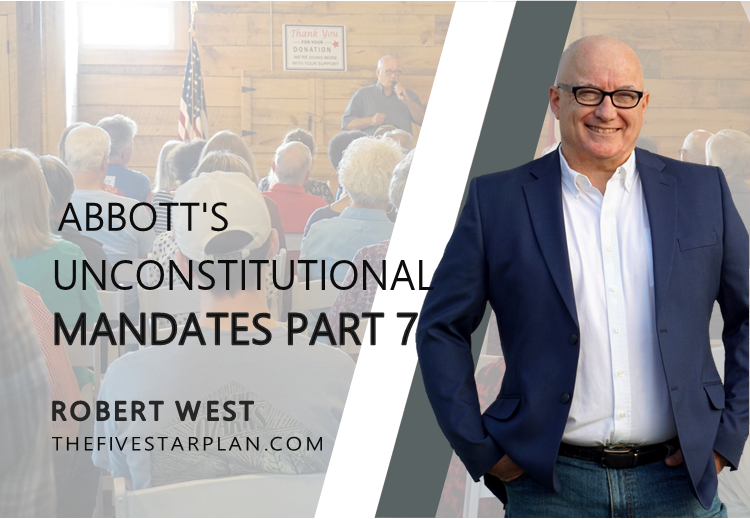 We have covered 6 violations Greg Abbott has visited upon the Texas Constitution.

Some of you have said that he did this all under the “Emergency Powers Act.”

This act was passed by the legislature under the Texas Disaster act of 1975.

So, when Abbott said “emergency” before he started a yearlong game of “Mother May I” with the citizens of Texas many believed his actions were legal.

This is what the Texas Constitution has to say about anyone in state government, any of our public SERVANTS, violating the Bill of Rights.

Sec. 29. BILL OF RIGHTS EXCEPTED FROM POWERS OF GOVERNMENT AND INVIOLATE. To guard against transgressions of the high powers herein delegated, we declare that everything in this "Bill of Rights" is excepted out of the general powers of government, and shall forever remain inviolate, and all laws contrary thereto, or to the following provisions, shall be void.

Get our Newsletter & Be Involved

Section 29 clearly states every part of the Texas government does not have the power to violate the Bill of rights.

Not Gregg Abbott, not the County Judges and it does not take a judge to understand this.

When Greg Abbott led you to believe he was lifting the mandates he merely “modified” the state of emergency.

To my knowledge no one has even asked him when or even if they will ever go away.

My guess he is waiting until HB3 passes.

I have no faith that just because 90% of Texans are against it the thing will not be passed.

After all, 90% of Texans oppose taxpayer funded lobbying and EVERY county government in Texas opposes it.

That is just how much these people respect your opinion. The lack of respect is even worse in Austin and x10 in the Governor’s Mansion.

You may support Greg Abbott and what he did but if he can ignore the constitution then so can the next governor and the next.

When those people do something you don’t like and you yell that it is unconstitutional, who will care?

Now do you see why, Governor Abbott needs to be censured?

If you're still not sure keep following this series because we have 3 more violations to cover before we finish.

Don't Skip Articles 1 - 6, be informed and get involved today!