Is Greg Abbott Sickly or Arrogant 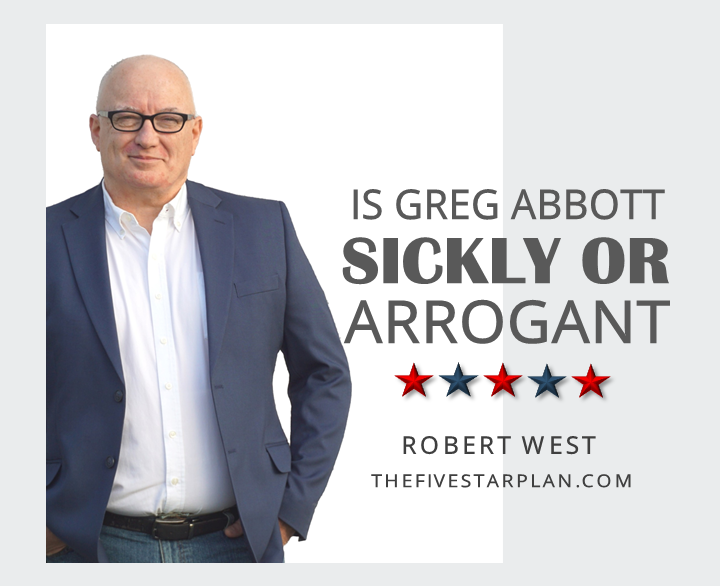 We recently learned that Texas Governor Greg Abbott has contracted the Covid-19 virus.

At this time, he seems to be asymptomatic. As we know, those that receive the best care available can quickly recover.

With that out of the way I have a couple of questions about what we have learned as a result.

For example, we have learned he was not only fully vaccinated but had also received the third shot.

According to the CDC website, the third shot is only recommended for those that are immunocompromised.

This group only makes up 3% of the population and is comprised of people, according to the CDC who are:

“Abbott is most certainly in a high-risk category although he appears in good health.” Said, Republican Texas State Representative Travis Clardy.

If Greg Abbott suffers from one or more of the categories that would make him eligible for a third shot then even though he “appears in good health” as Travis Clardy said, it does not mean he is in good health.

Don’t you think Republican voters should be made aware of how serious his condition is before deciding who to run in the general election?

As many have noticed in the last couple of years Abbott has made very few public appearances, even cancelling his planned speech at CPAC in Dallas.

The popular opinion up until now has been that he has done this to avoid getting booed from conservatives unhappy with his violations of the, Texas and US Constitutions stemming from his mandates.

However, with this new information that he’s in the high-risk category he may not have been able to attend these events.

With the Republican Primary looming and a crowded field of challengers, will he be able to campaign against a younger, healthier, more energetic opponent in the general election?

Of course, Governor Abbott could be in the peak of health after he gets over this virus.

In which case we would have to ask, why did he take a third dose if he does not meet the CDC requirements?

I am sure there are millions of people here in Texas that would like to get a third dose for an additional level of protection but cannot.

What Else Could it be?

Could this be just another example of special treatment for politicians?

Recently, US Representative Missouri Democrat, Cori Bush was confronted about advocating for defunding the police but having tax-payer funded armed guards in a CBS News interview.

Her answer? She faces death threats, and her work is too important to be derailed by violence.

While telling her voters that she is getting rid of their armed protection, the police. She is also telling them that she will continue to spend as much as it takes for her protection because she is “essential.”

She is telling these people that “Black lives matter, but mine matters more.”

We know Greg Abbott is getting the very best treatment for the virus.

Monoclonal antibody treatment, that could have saved literally thousands of people with the worst cases, even though his case is non-symptomatic according to his spokesperson. Which is odd.

FDA rules require patients to get the treatment within the first 10 days of symptoms.

The FDA recommends giving this treatment to people within 10 days of “symptoms” but Greg Abbott reportedly had no symptoms.

While Texas has had over 54,000 deaths due to the virus there are many Texans that will never be able to get this treatment. El Paso, hard hit by the pandemic, received enough for just 1600 people.

While people are developing symptoms and dying all over Texas our elected politicians are getting these treatments, even without symptoms.

As you can see it is not an issue with just one political party. Cori Bush is a Democrat while Greg Abbott is a Republican.

Get The Five Star Plan News

Remember to open your welcome email.

A Government we do not Trust

“How has America devolved to the point where the overwhelming majority of the people do not like and do not trust the government at any level?” -Texas State Senator Bob Hall, The Five Star Plan

The answer? They have worked for it.

We have statements that the Governor has no symptoms but gets a rare, lifesaving treatment not available to most Texans with symptoms.

We have statements that he is healthy but also that he is in a high-risk immunocompromised group that only 3% of the population is in; he gets the third shot for more protection.

Is he healthy, arrogant or both? We might have to just flip a coin and hope that it does not have two faces.