Voting Against Abbott in the Primary 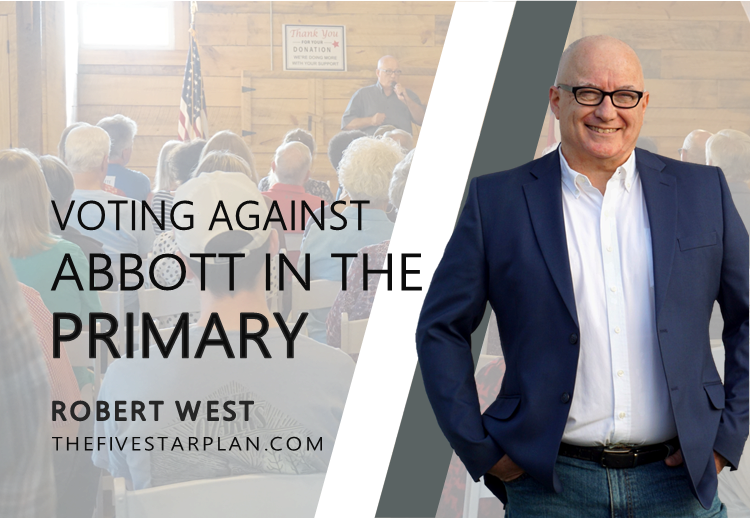 We’re you called “Non-essential” and put out of work by Greg Abbott?

Do you want to return the favor without voting for a Democrat?

Here’s how we can do just that…

To start out I am biased. My family has fought and bled for freedom as far back as I know and it has continued with both of my children.

The constitution tells us what our government is allowed and more importantly, “not allowed” to do.

I’m not going to cover Abbott’s violation details because they’re available on my website and in my book “The Five Star Plan.”

What I will tell you is that Greg Abbott violated his oath, both the U.S. and Texas Constitutions and our rights as Texas citizens.

Not one person has argued with me about this statement except to point out the 1975 Texas Disasters Act.

For those not familiar with how government works, the constitution cannot be modified by laws, only by amendments.

The Texas Disasters Act gives the governor power the constitution denies him; therefore, the act is unconstitutional, null and void.

The legislature can no more hand power to the governor in addition to what the constitution gives him than they could take away powers it assigns to him.

If this was not the case, they could just take away all the power from him at any time or make him a king with a simple vote.

What is a Tyrant?

As of this writing the only candidate to have read, endorsed and agreed with the “The Five Star Plan” has been Don Huffines.

This article however, is meant for the supporters of every challenger to Greg Abbott.

I wish that all Abbott challengers do well; I see them all as better choices than our current Governor.

If you have never voted in a Republican Primary Election let me welcome you to participate.

The more you know and vote, the better Texas is for all of us.

The schedule for primary voting will be a bit fluid this year because of redistricting.

You will want to contact your County Clerk or go on your county website under “Elections” and get the dates and time for the Republican Primary Election.

You can do that now; I will wait here…

Great, put that into your phone or on your calendar because it is the most important election this year, perhaps in your life and maybe in the lives of your kids and grandkids.

Think I’m overstating the importance of a state primary election? Not by a long shot.

This is a revolution of sorts. Every 2 years we Americans hold a revolution at the polls and can change the course of our country if we show up knowing what we are doing.

This advantage is why other countries look up to us. The best part is that we do not have to bury bodies or spend millions rebuilding when we’re done.

Showing up educated makes us better.

Not showing up or showing up uneducated well, that leads us down a dark path.

So, you have this date, and you are set to vote, what next?

There are several challengers to choose from and so far, all of them are better than Greg Abbott. Go online and search “Candidates for Texas Governor.”

Now you have the list, please research each and I’ve helped a little by linking the few that have already announced as of June 14, 2021.

Your right to vote was paid for by the blood of heroes, never forget that. This right is a sacred gift that many never unwrap, few use and even fewer treat with the respect it deserves.

Voting is not a team jersey, there are people, in both parties that should not be in office, ever.

So, you have the date saved, you will vote and you have picked out your candidate.

Since that is out of the way, you should contact the campaign and volunteer, right?

Remember all those other candidates I told you to research?

You can save that large stack of cash for your favorite candidate but you need to do this, now, like today.

Why is this important? Each individual donor is like a badge of honor for a candidate; this encourages their supporters and adds fear to Greg Abbott. You know, that serious expression he makes, like when he got .02% of the straw poll at CPAC.

That’s No mistype, 2/10th of one percent, even Romney did better.

Getting People to The Primary

The more candidates in the Primary race, the more people will turn out to vote. This lowers the chance of Abbott getting 50% plus one and avoiding a runoff.

Once the Primary is over and nobody has 50% plus one there will be a runoff and the top two vote getters will go head-to-head.

Abbott violated the Constitution and your rights, not the other challengers. Think of this race as a group effort on the part of all the challengers.

Once the runoff is announced, between Abbott and the Challenger we'll be on same side, and we better be on speaking terms.

The Texas House of Representatives, at least the overwhelming majority, have proven they are spineless cowards that will not protect us and are weasels with more loyalty to Abbott than to Texans.

If Abbott gets back in office, expect more violations, less freedom and higher taxes.

After all, it will show that voters are cool with a tyrant, as long as it is an “R” tyrant.

So, you’ve sent money to all the challengers, you’ve volunteered for a campaign and all those other candidates are running.

Make sure you say nice things about each challenger, in fact, if anyone else says bad things about challengers shut them down. You can make nicer comments about your candidate and remember anyone running is better than "Mad King Abbott."

Be on the lookout for the two breeds of Abbott social media trolls that have been identified.

There is a Nuclear Option that I have been trying and that is to get County level GOPs to pass a formal censure of Governor Abbott. Get enough of these and he won’t even bother to run.

There are directions for that on my website and in my book, The Five Star Plan. We already have 14 County GOPs that have proven they are patriots, not cowards.  Is your county on that list?

I'm going to ask you to do one more thing, share this article with all your friends.