How to Bring Down a Texas RINO 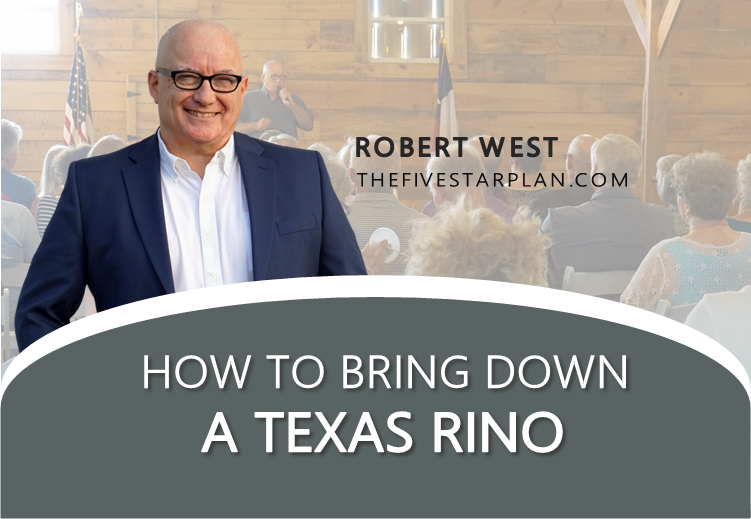 The reality has hit home, your Texas House Representative is a RINO of epic proportions.

Questions begin to surface like, “How do we bring down this RINO?”

Or a better question might be, “How do we make sure that person is defeated in the next election?” You know that in the General Election you don’t want their opponent to win so that just leaves defeating them in the Primary Election.

The incumbent advantage will be huge in 2022 and if your RINO is allied with Abbott it gets even worse.

Let’s not dwell on the bad news. The good news is that some very clever people have come up with a way around these advantages.

What follows will not give you an even shot at defeating them, it will give you an almost 90% chance of defeating.

It is important that this incumbent must have several bad votes and that you can communicate why these votes make them unacceptable.

This shouldn't be a problem but you may want to read the following articles later:

The Bring Down Example

We could choose almost any Texas Representative as the bring down example.

This district is represented by Gary Wayne VanDeavers and he has held this seat for four terms.

So, the first thing you would have to do is a little research and find out how your target representative is ranked.

My 1st place to check is the Texas Scorecard.

No passing grades, bad news for him.

A group called “Environment Texas” gives him a 60, a liberal organization ranks him higher than his average among conservative groups.

Now we can go to the “Texas House of Representatives” website to dig around.

Representative Gary VanDeaver recently voted for HB 1082,  to give public servants better privacy rights than ordinary citizens but so did most of the House.

In 2019 there was HB4448 that would allow Amazon to deliver packages by drone.

The problem was, the drones were made in China and by law they would have a backdoor to let Chinese intelligence agencies use them whenever they wanted.

Once the problem of thousands of Chinese drones flying all over Texas, over our infrastructure, military bases and near our electric transformers was made known it died.

Mr. VanDeaver’s along with 25 other Republicans voted for this bill AFTER the problems were explained. That is an issue.

You might want several votes like this to organize a bring down campaign.  In a District as conservative as HD1 this might just be enough on its own.

Now Look into the District

Mr. VanDeaver lives between these two in Red River County with close to 13K. Why is this important?

Anyone challenging Mr. VanDeaver from Texarkana would be running against a candidate that lives closer to Lamar.

Anyone from Lamar would be running against someone that lives closer to Texarkana.

How to Get This Guy Unelected

If you really wanted to get this guy unelected you would have to find viable challengers in both Bowie and Lamar.

Each of these challengers would have the home field advantage and should do better in their own counties.

By working together Mr. VanDeaver would be facing two challengers from more populated areas.

When concentrating on their home areas each of the challengers could actually spend less money on their campaigns while appearing to do more in their own counties.

Mr. VanDeaver might have a strong ally in Greg Abbott who has a huge war chest but Mr. Abbott has his own race to run.

More than one horse race will be contested this time around. Abbott’s war chest is not infinite so don’t worry too much about being outspent.

If you can get one or more GOP Executive Committees to pass a formal censure of Mr. VanDeaver for his bad votes that would help as well.

This is a simple plan for bringing down a RINO and should work almost every time if implemented correctly.

You have to hurry though, the deadline to file and run in the Primary is December 13th of 2021 at 6PM.

If you’ve read my book, you already have a head start. Now master those steps and begin growing your organization.

Activate The Five Star Plan for both challengers along with a campaign plan based on your research.

My book works, but it does nothing if nobody reads it or worse fail to implement the steps in each chapter.

Remember to Open Your Welcome Email

I cannot take credit for this bring down tactic but it does seem to work right at 87% of the times it is tried.

Whenever your team loses in a playoff you tend to root for the team that beats them in the championship. In the same way when your challenger goes down and throws their support to the other challenger the incumbent is still facing both challengers.

I look forward to seeing a lot of these tag team challengers in 2021 so that we can clean out the stalls in Austin, because the BS is stacked pretty high.

Reach out to me, I can share this concept in person at your next meeting.

Hoped you liked this article, now I have to make a couple of calls to make, one to Lamar and the other to Bowie. I don’t live in the district but nothing stops me or you from helping Texas.  Go find those candidates or step up yourselves.