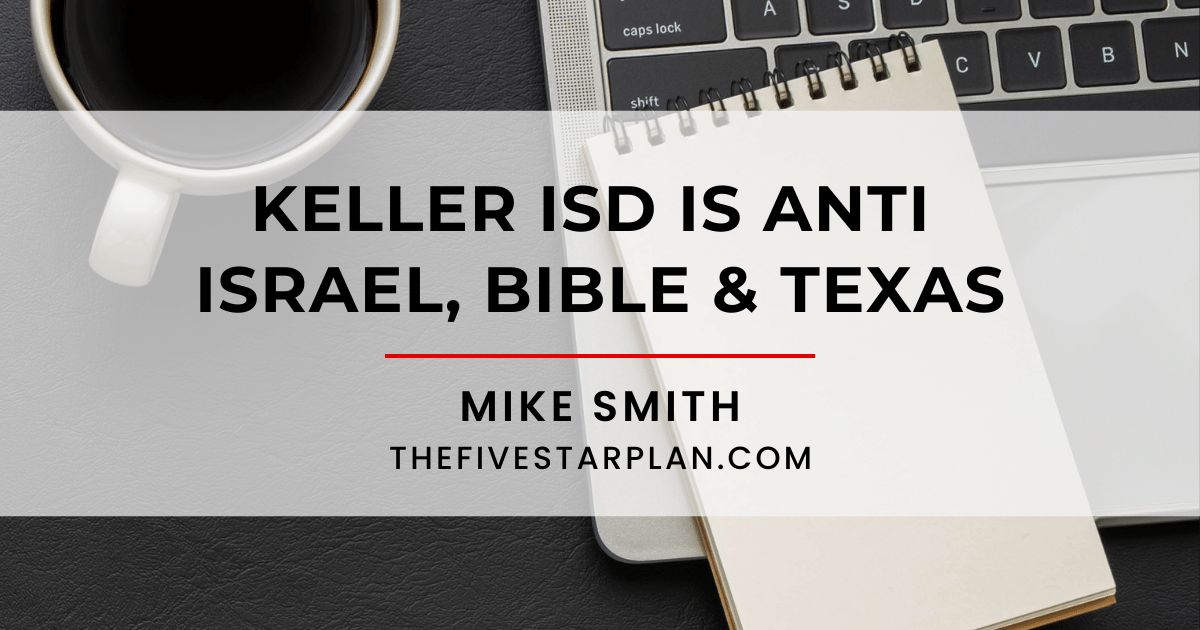 Recently, the Keller Independent School District (ISD) decided to remove from all curricula both the Bible and The Diary of Anne Frank. As a naturalized Texan, and Pro-Israel Christian who moved here escaping domestic tyranny, I find this disturbing.

You read that right: Keller ISD has nixed the Bible and The Diary of Anne Frank from circulation.

Granted, urban and rural Texas are two different worlds and Keller ISD is certainly no stranger to doing what is very, very wrong. For Starters, read these articles.

Banning Texas school children access to the work that makes Western Civilization and also banning one of the strongest memoirs of a young lady slain in the Holocaust, shows how troubled the Dallas-Fort Worth Metro area has become.

To give an idea the clash of cultures, there is a rural Texas school off Highway 175 that flew the Israeli flag beside the Texas and American flags for many months. I very much doubt that the school Board of Trustees would have even thought of doing what the Keller ISD school board has now done.

This whole issue is simpler than what several folks are making it out to be. The Bible (again, now banned by Keller ISD) spells out that God blesses individuals and nations that bless Israel, and curses those that curse Israel (Genesis 12:1-3).

Context and history wise, this means Israel the people (everyone of Jewish lineage, religion and both) – not just Israel, the nation.

So, the recent decision to ban both the Bible and The Diary of Anne Frank by Keller ISD adds insult to injury atop clear Jew hatred by paid government officials in this school district.

Calling Out and Keeping Texas, Texas

Folks, I lived through the misery of what happens when a state curses Israel – despite voting Republican since age eighteen.

Many more Texans need to stand and speak out against everything that curses Israel. If Colonel William Barrett Travis, Sam Houston, Davy Crockett and every other Texas Founder were alive today, they would surely call for the same.

Keeping Texas, Texas –and restoring American greatness– hinges on our great state continuing to bless Israel – starting in our own neighborhoods.

Most folks do not know that government schools (public schools, aka ISD) are the closest level of public policy-making government to the people. Now these school systems and their campuses are all unconstitutional, but (barring an Act of God) they are also here to stay for the long foreseeable future.

Texans everywhere need to fight evil wherever it surfaces.

The Texas neighborhoods being ‘served’ by Keller ISD are not alone in being wronged by evils done against young schoolchildren and their parents. But you are not alone either, fellow Texan so, speak up!