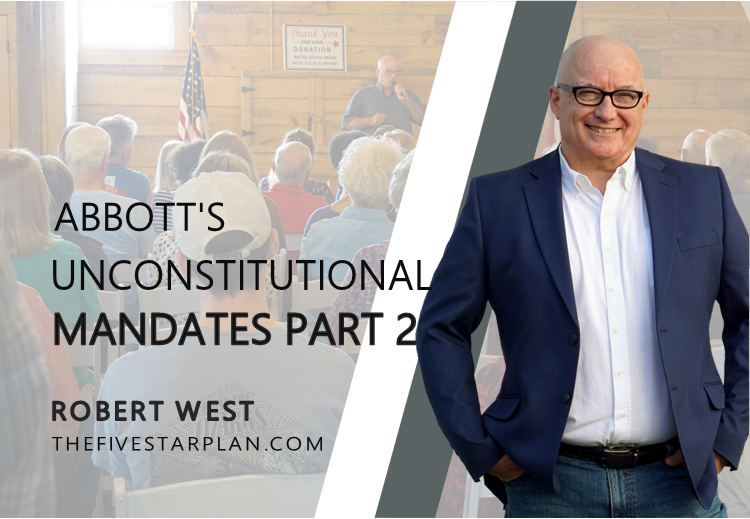 If you’re just joining us, begin with part 1 of Abbott’s unconstitutional mandates to censure.

In part one we spoke about Freedom of Religion but not everyone is religious.

Sec. 9. SEARCHES AND SEIZURES. The people shall be secure in their persons, houses, papers and possessions, from all unreasonable seizures or searches, and no warrant to search any place, or to seize any person or thing, shall issue without describing them as near as may be, nor without probable cause, supported by oath or affirmation.

When the state closes a business for a day it's a “taking.”  That is private property...

Property you are not allowed to use is not property you own or control.

If the state ordered you to only drive every other day, they would be taking half of your car.

If I move into your house, I am taking your home, even if I say it is only for a couple of weeks to “flatten the curve," it is still theft.

Where was the warrant when Abbott shut down those businesses?

People might argue that not taking the building is not a taking but the TABC crossed that line completely.

In defiance of the unconstitutional closing of their businesses some owners defied it.

Without a warrant and with no legal authority, the TABC stole their alcohol.

You “confiscate” something when you have authority to confiscate, you steal it when you do not.

Is this up for debate?

Not when a judge orders the booze to be returned because they had no warrant and no legal authority to seize it.

The closing of a church, bar or hair salon may not be a big deal to you?

When the government uses their power they rarely stop and often expand the practice.

Where do you and your family work?

The Relief of Being declared Essential

Even people that breathed a sigh of relief by being declared “essential” suffered from this practice.

On my way to an event recently, we passed an Office Depot that is now out of business.

They were essential, why are they out of business?

Because many of their customers were shut down and did not need their services.

Gas stations and grocery stores are closing for good, not because of the mandates but because the mandates shut down and stole the livelihoods of the people around them.

We do not protect other people’s rights because we are nice.

We protect the rights of others because we believe they will return the favor and protect ours.

Why did our founders want a warrant issued BEFORE seizing personal property? Because it would save time, money and lives.

Instead of going through that hassle, expense and creating resentment, a judge can simply refuse to issue such a warrant.

The owner would have never been aware about such plans to take his or her personal property, like booze.

If I show up with a bunch of people and manage to make off with another's property, I would get prosecuted.

Why are the TABC agents or the people that ordered the “taking” not in jail awaiting trial?

Next time I’ll be covering Article One, Section 16 of the Texas Constitution.

If you want to read ahead then pull up that section here.

I’d rather you get way ahead of the curve and get my new book “The Five Star Plan.”

I cover all of Abbott’s unconstitutional mandates and more. If I tell you it’s a great read it might be bragging.