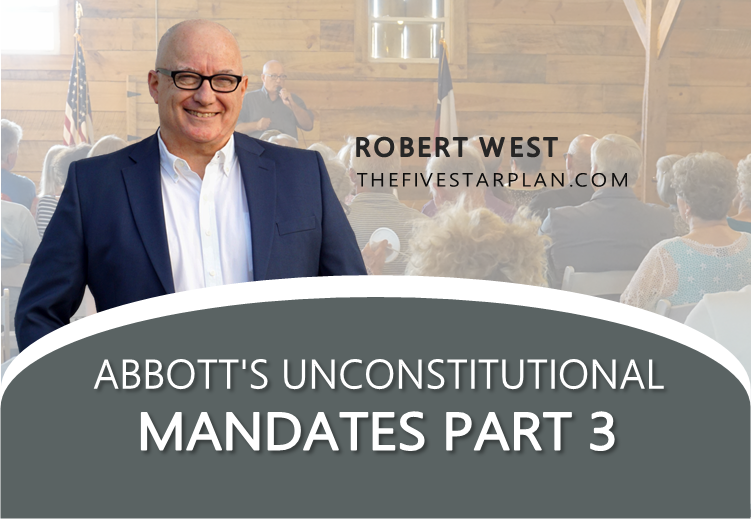 We continue with Part 3 of Abbott’s unconstitutional mandates. In this part, we’re explaining Article 1, Section 16 of the Texas Constitution.

If you’re playing catch up make sure to read the first two violations:

Article 1, Sec. 16. BILLS OF ATTAINDER; EX POST FACTO OR RETROACTIVE LAWS; IMPAIRING OBLIGATION OF CONTRACTS. No bill of attainder, ex post facto law, retroactive law, or any law impairing the obligation of contracts, shall be made.

One of the things mentioned in this section is that no laws can be made retroactive.

I cannot watch you do something that is legal, like jumping into the water from a pier, then run down to Austin and have it made a crime BEFORE you jumped from the pier.

Likewise, I cannot sell you a vehicle then make a law that states, no one can transfer a car without a permit, "then have that law start before the purchase took place.”

How Did ABBOTT Violate This Provision?

How did Greg Abbott violate this provision of our Texas Constitution?

At the beginning of a new year most of us make these great New Year resolutions.

We have all done this and fallen short a time or two but most of us still try.

Across Texas many, many people had great hopes for 2020 and many thousands paid a full year's gym membership in advance.

The logic goes something like “If I pay for it now, I’m more likely to stick with it.”

That is the logic but trust me, I bought a book to help me through Algebra and I never do math.

So, when Governor Abbott ordered gyms to shut down as “non-essential.”

What happened to the people that paid for a full year signed contract?

Most contracts have clauses that say “we keep your money” as long as “it was not our fault.”

These mandates violated Section 16 by making it illegal to do something that up until that time was legal, like operating a gym.

They made the agreement impossible to carry out AFTER it had been made and, in some cases, paid.

Who is at Fault?

You can say what you want about who was at fault but the simple truth is that no one will ever get back their time, money or health from the "state" that took those things.

If it had been legal that would be one thing but when it was spelled out that this is something you CANNOT do, that is another.

Meaning they have written down and complained about his unconstitutional acts while in office.

For the GOP to take this action against a sitting governor of their own party is surprising and shows just how far Greg Abbott has gone.

While any one of the violations of the Texas Constitution is insufferable to a free people one could explain a single violation away as a mistake.

If you’re beginning to get a clear insight to these violations, I’d like you to look at my book, The Five Star Plan.

It also contains this information and everything you need to get active in Texas government.

You can do something today, get the book and get our free PDF, to Censure Abbott so that no future governor violates our rights ever again.

You are the voter, the single most powerful position in state politics, never forget it.