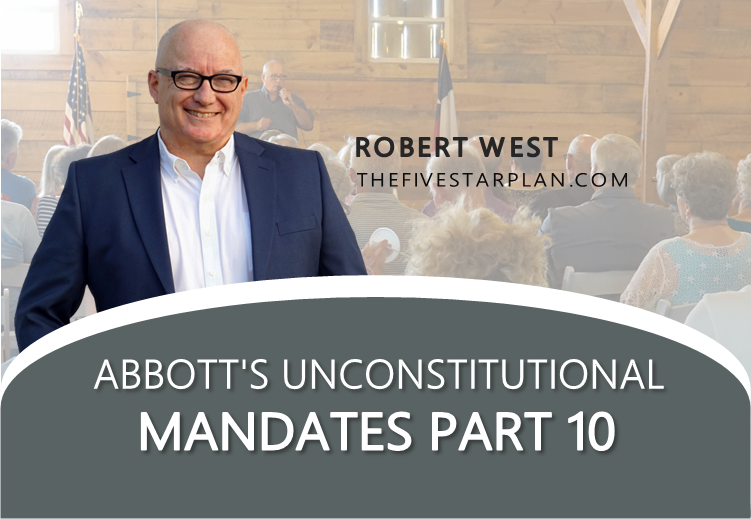 Alrighty then, here we are the final straw of Abbott’s unconstitutional mandates.

However, if you are just reading to gather one more bit of ammunition, that I can understand.

If you are here because you have a compulsive nature, I am tempted to delay, but I won’t.

A larger percentage of people do not understand “separation of powers” and why they were so important to our founders.

So, let me explain.

If you have one set of people writing laws, they can make mistakes, it happens.

If you have another set of people enforcing law, a little more human understanding is possible when the rubber meets the road.

A cop could say, “I have the authority to bring you in and place you on record because you were drinking at 11:59pm, when you’re not really supposed to until midnight…”

A judge could say, “No, the law does not mean from the day you were conceived, you were drinking under age because your birthday is the starting point and that’s months away, but nice try.”

With three sets of people what is written, what is allowed and what is enforced favors the people more than the government.

The people that wrote the Texas Constitution had just came out from under reconstruction rule, where one person had all the power.

They set up our state to avoid that situation, now read Article 2 section 1.

Article 2 Sec. 1. SEPARATION OF POWERS OF GOVERNMENT AMONG THREE DEPARTMENTS. The powers of the Government of the State of Texas shall be divided into three distinct departments, each of which shall be confided to a separate body of magistracy, to wit: Those which are Legislative to one; those which are Executive to another, and those which are Judicial to another; and no person, or collection of persons, being of one of these departments, shall exercise any power properly attached to either of the others, except in the instances herein expressly permitted.

What is Separation of Powers

This separation of powers says in a nutshell that legislators write law, the governor enforces law and the judge’s rule on law.

It then goes on to say that outside the Constitution, none can do the other’s job.

This would require a change to the Constitution.

The entire Emergency Powers Act is unconstitutional according to Article II, Section 1 of the Texas State Constitution.

Any Judge that used this power, any Sheriff that enforced this power and any State Legislator or State Senator that stood by and let this happen has broken their oath.

Now can you see why regular people need to step forward? If good people don’t get involved that only leaves evil.

How can we possibly complain about the federal government or other states when we will not hold our own state officials, from both parties, accountable?

People applaud Paxton for suing five states because they changed election law without the legislators but Abbott did the same thing.

If Paxton was suing states that broke this rule why wasn’t Abbott’s name on the list?


I can’t say I hope you “enjoyed” this 10-part series but I do hope you found it useful, informative and motivating.

I publish at least one article a week, with some weeks seeing two or three.

These publications are not as good as my book but it does gives you a sample of my writing style.

Get involved, pick a goal, find people willing to help and let’s move Texas and our country in the right direction.  Get The Five Star Plan Book.