How to View Texas Constitutional Amendments 2021 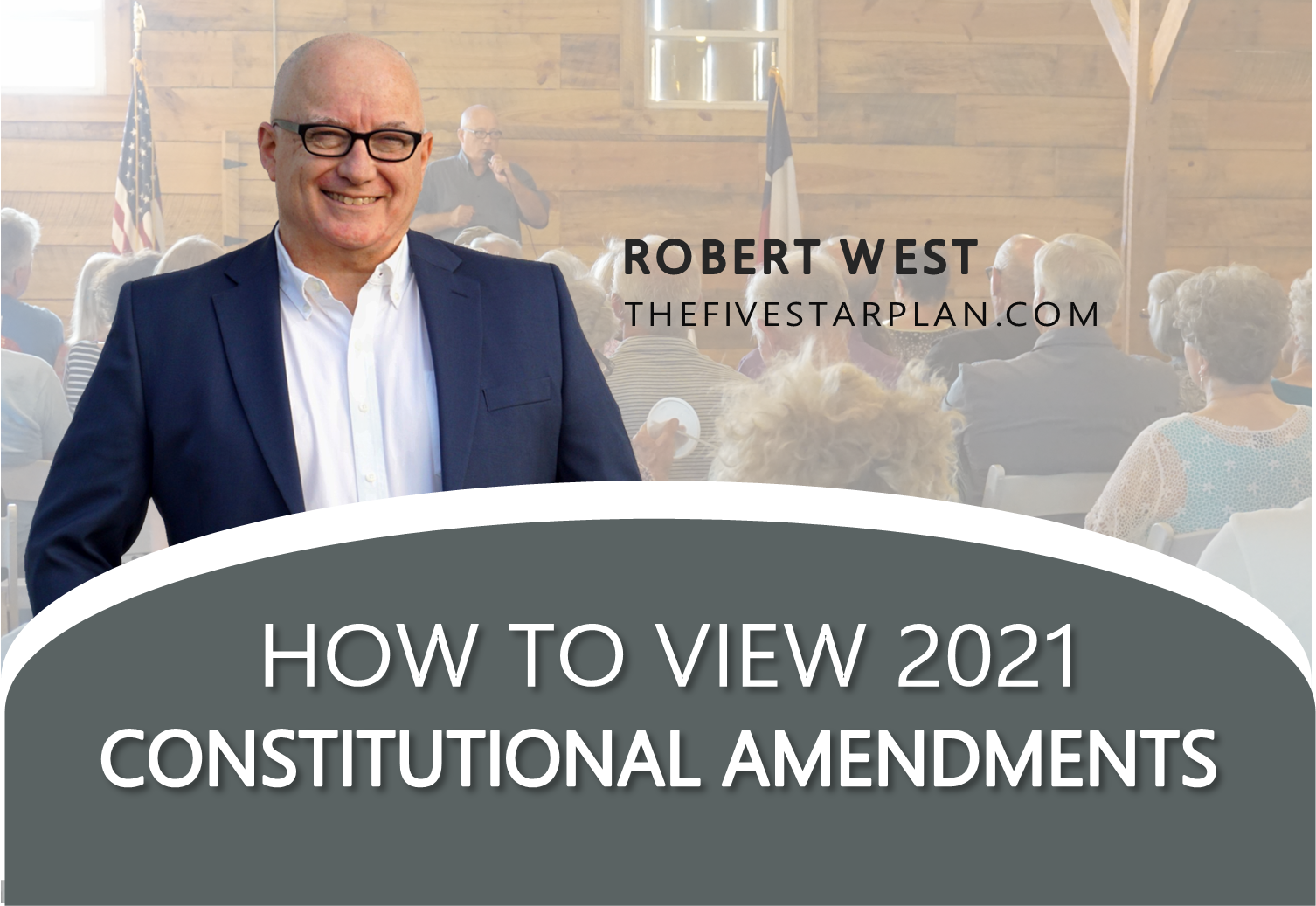 As busy as we all are it is easy to lose track of time. We are now weeks away from our next trip to the polls.

I’ve been contacted by many, asking about the "Proposed Constitutional Amendments" we will be voting on in Texas, November 2nd.

I have read them, visited several sites to get different views hoping someone would change my mind or bring up an angle I have not thought of.

My first take remains the same as when I read the text for the first time.

I tell everyone that your vote and mine were purchased with the blood of better people. It is a sacred honor to take your place as the owner/operator of this nation and let your choices be known.

My opinions on these things are mine, your vote is your vote and reasonable people can disagree.  With that in mind, here is my take on this year's proposals.

This would change Article 3, Section 47 of the Texas State Constitution. It would allow professional sports teams to have raffles at rodeo venues for charities.

Our state runs a Lotto so it only makes sense to allow everyone else to use gambling to raise money for a good cause. If you do not like gambling you may not like this but it’s not like anyone will be forcing you to buy a raffle ticket.

I will be voting “Yes” but you will never see me buying a ticket and it would be pretty amazing if you saw me at a rodeo.

HJR 99  “The constitutional amendment authorizing a county to finance the development or redevelopment of transportation or infrastructure in unproductive, underdeveloped, or blighted areas in the county.”

This would allow a county to issue bonds to fund infrastructure and transportation projects in certain areas that they deem underdeveloped or blighted. It would forbid them from pledging more than 65% of the increase in ad valorem tax revenues to repay the bonds.

I will be voting a strong “No” on this because extending the “borrow and spend” model to counties is not something we need.

In addition, someone mentioned that the amendment would allow way too much latitude in what areas would get such funds. You could end up with the poor shouldering an additional tax burden so that other areas get better infrastructure.

SJR 27   “The constitutional amendment to prohibit this state or a political subdivision of this state from prohibiting or limiting religious services of religious organizations.”

Proposition 3 would change Article 1, Section 6 of The Texas State Constitution by adding a new section to prohibit the state or any political subdivision from limiting religious services or organizations.

This one is like asking me, “When did you stop beating your wife?”

If I vote “No” it says I do not support freedom of worship.

If I vote “Yes” it says I don’t think we already have this right through the State and Federal Constitutions. I believe I will vote “No”

Not only do I believe the state clearly has no right to forbid religious gatherings and in particular the Governor of Texas has no legal basis to order or authorize such mandates, but if we include this change it says in a backhanded way, the POWER to forbid such services did rest with the state up until now.

Sec. 6. FREEDOM OF WORSHIP. All men have a natural and indefeasible right to worship Almighty God according to the dictates of their own consciences. No man shall be compelled to attend, erect or support any place of worship, or to maintain any ministry against his consent. No human authority ought, in any case whatever, to control or interfere with the rights of conscience in matters of religion, and no preference shall ever be given by law to any religious society or mode of worship. But it shall be the duty of the Legislature to pass such laws as may be necessary to protect equally every religious denomination in the peaceable enjoyment of its own mode of public worship.

In addition, when Greg Abbott violated the Texas Constitution 14 different ways and counting, how would this stop him from doing it again whenever he felt like it?

Stay Updated and Get My Newsletter

SJR 47 “The constitutional amendment changing the eligibility requirements for a justice of the supreme court, a judge of the court of criminal appeals, a justice of a court of appeals, and a district judge.”

The amendment adds requirements for a justice of the supreme court, judge of the court of criminal appeals, justice of a court of appeals and a district judge.

If this were to pass you could not run for any of these positions unless,

These requirements would kick in January 1st of 2025 and I will be voting No. We have been around for a while and I have never heard anyone complaining about these things.

Next up it limits not only the number of people that qualify to run for these positions but it insults the voter. Call me crazy but does it sound like a bunch of Texas attorneys got together and decided to protect what they see as their future career path?

On top of that there seems to be no exception for anyone that had their law license suspended or revoked but had it restored because it turned out they were not in the wrong.

I see this opening opportunity for abuse and I see no compelling arguments for removing choices from the voters.

HJR 165   "The constitutional amendment providing additional powers to the State Commission on Judicial Conduct with respect to candidates for judicial office.”

The Texas State Commission on Judicial Conduct can accept and investigate complaints and reports against candidates running for state judicial office.

The argument in favor of this proposal is that it is “unfair” for an incumbent to be subject to this commission and standard of behavior but not a challenger who is not already a judge.

My argument is that why should a person who is not yet a judge be subject to standards and a commission intended for sitting judges?

This seems like a measure designed to protect an incumbent from a challenger as if being an incumbent was not already a huge enough advantage.

I will be voting “No” on this one.

SJR 19  “The constitutional amendment establishing a right for residents of certain facilities to designate an essential caregiver for in-person visitation.”

This would give residents of nursing facilities, assisted living, or state-supported living centers the “right” to designate an essential caregiver that may not be prohibited from visiting the resident, even during a pandemic.

Again, with giving people rights they already have. What gave anyone the authority to place innocent people in solitary confinement and deny them the care and interaction with family members?

So, they will not place innocent people in solitary confinement during a pandemic but what other reasons can they come up with to do this?

I will be voting “No” because once again, it tells people that did this, they had the authority before now and they clearly did not.

It is also a sham because our U.S. and Texas Constitution covers us all from imprisonment without due process, even when tyrants shout “emergency” at the top of their lungs.

HJR 125 “The constitutional amendment to allow the surviving spouse of a person who is disabled to receive a limitation on the school district ad valorem taxes on the spouse’s residence homestead if the spouse is 55 years of age or older at the time of the person’s death.”

The disabled in Texas can ask for a $10,000 homestead tax exemption and a limit on school district property taxes now. This would allow the legislature to extend a homestead tax limit for surviving spouses of disabled individuals as long as the spouse is over 55 years old and resides at the home.

I will vote “Yes” on this as it is one of the rare times, I see anyone in Texas getting a tax break.

Taxing the surviving spouse out of their homes in the year following their spouse's death is just sick and wrong. Why doing this to a 54-year-old is O.K. I am not sure.

Do we have so many disabled exemptions that granting all of their spouses this small favor would bankrupt the state?

SJR 35 “The constitutional amendment authorizing the legislature to provide for an exemption from ad valorem taxation of all or part of the market value of the residence homestead of the surviving spouse of a member of the armed services of the United States who is killed or fatally injured in the line of duty.”

This would authorize a total residence homestead property tax exemption for a surviving spouse of a member of the armed services “who is killed or fatally injured in the line of duty.”

We already do this for the surviving spouse of anyone “killed in action.” This would extend it to include deaths due to training or other military related activities.

I will be voting “Yes” on this.