Are Republicans Tired of Being the Abused Spouse 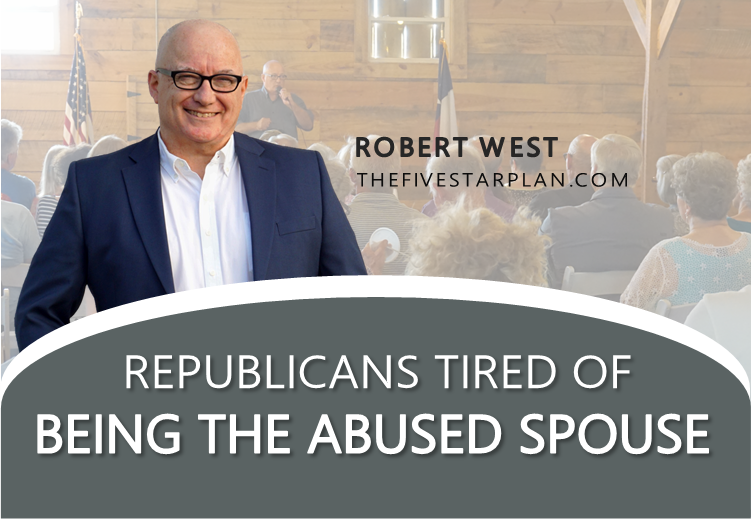 Republicans are currently in an abusive relationship with the present governor, Greg Abbott.

If you disagree with that statement let me remind you that during 2020, Greg Abbott violated the Texas Constitution, and your rights, in more than 14 separate ways.

There is no debate on this that I can find.

Greg Abbott broke his oath to “protect and defend the Constitution” as much as any abusive spouse broke their oath to “Love and cherish.”

So why would any voter even consider voting for this man again?

He literally meets the definition of the word “tyrant” in the dictionary.

An abusive relationship is often covered up or discounted due to fear and tolerance.

Imagine you have someone you care about, a family member or close friend in an abusive relationship.

If you offer to help them leave, are they more likely to get in the car and thank you?

Or will they refuse help and get angry with you?

You will hear the abused say,

It’s difficult to get an abused spouse to realize they deserve better or that better is waiting for them.

They think this is the best they can do and “Other people have it much worse.”

Sometimes you can get them to take action if their kids are also being abused.

Other times not even that will help.

Granting Abbott, a single vote in the primaries is telling him that his violations are ok with you.

Governor Greg Abbott broke his oath and he cannot be trusted.

He put millions of Texans out of work, destroyed thousands of small businesses and his violations led to countless deaths.

These deaths can never be accurately counted, either through lack of medical care or suicide.

Don’t talk about what he was like before or after Covid, a crisis does not change a person’s character, it only reveals it.

Abbott is someone that cannot be entrusted with any level of public service because he does not see himself nor does he act as a servant. His is the attitude of a master.

Abbott is like a waiter that tells you what you will have and how much; Texas can do better.

At last count there were millions of Texans who haven’t abused your rights or called you “non-essential.”

All of these people are a better choice than a man that has proven he can and will do these things and continues to this day.

You need to stand up and tell yourself that you and your children deserve better.

Be Involved & Get our Newsletter

Courage to Leave an Abusive Situation

It is worth it because too many have sacrificed too much for you to not step up and get involved.

The Five Star Plan is a solution for voters and Republicans to begin the process and end this abusive relationship with Governor Abbott.

Read the reviews, look through my website and tell yourself “I deserve better.” In fact, we all do.

You may also enjoy, Texas Legislative Keep Away...