How to Choose Primary Candidates 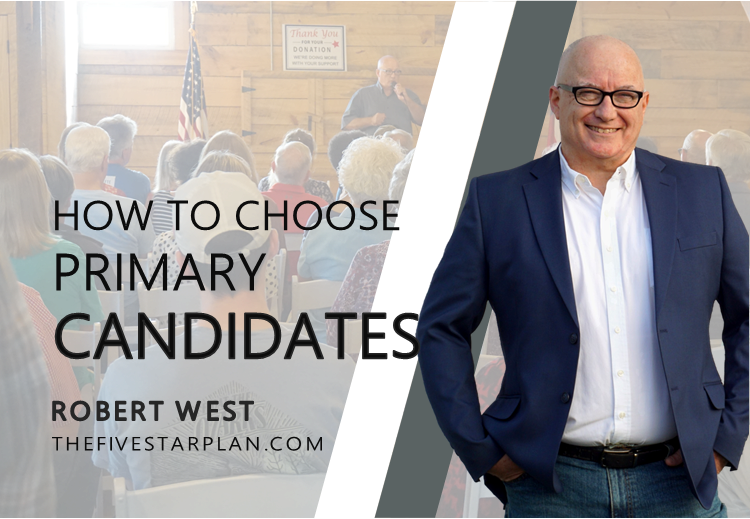 For a lot of people choosing a primary candidate is a matter of finding someone with the most experience in running for office. They will have a higher education with the ability to raise the most money.

Your ideal candidate might be an attorney that has served in several offices and knows enough people to gain endorsements from well-known politicians.

They may also have accomplished a lot in those previous positions and know what it takes to play the game.

If you have ever been involved in a hiring process, there are a certain set of basic requirements.  If people meet or exceed them, they are considered for the job while the rest are dismissed.

Voter Questions When Choosing a Candidate

Many times, good people are dismissed when choosing a candidate.

The primary can be the most important part of the election process because this is where you could have a choice between the greater of two goods instead of the lesser of two evils...

For me, the State Representative that stands out is Bryan Slayton. He’s not an attorney, never served in office and is actively mocked and slandered by those in power.

Bryan will cause waves and vote the right way but will probably get very few things passed as he is not part of the system.

When “we don’t have nearly enough laws” becomes a top concern this will be a problem for me, but not now.

Now, let’s look at who might be your favorite State Senator.  For me that would be Bob Hall and he didn’t get into politics until after he retired.

State Senator was his first elected office, no law degree and no connections. I doubt anyone is less popular with the elite’s in Austin than Bob Hall, but I'm working on it.

Senator Hall, since his first trip to Austin, has tried to get legislation passed to harden the Texas electric grid. He hasn’t been effective in getting much passed because he doesn’t play the game.

I’m fine with that, as are most true Texas conservatives. The people that play the game, have never tried to get this done at all.

Who's been your favorite President in recent years? I’m going to go out on a limb that it wasn’t an attorney, he never held any elected office but he got things done, right?

If your top three employees do not meet your criteria but your least favorite employees do, would you consider changing the requirements?

People that Serve for the Next Office

I have no problem with attorneys, people that serve well in office, can get endorsements, know how to organize and run a winning campaign.

The problem I have is with people that focus on winning the next campaign to the point they don’t have time to do the job we hired them for in the first place.

If you are always posing, working for the next election and the one after that, when would you have time to actually get anything done?

Many people in the GOP have no problem with people running for office while “serving” in another.

I wonder, would they have a problem paying a salary to an employee that does no work because they have interviews set up six or seven days a week with other companies?

So maybe choosing a career politician shouldn’t be a criterion in the next primary?

Maybe not being paid to do one job while spending every waking moment trying to get the next one should also go on the list?

Maybe not being so connected with the insiders should make it to that list?

Done with Career Politicians who Fail

I am done voting for the same kind of people and getting the same kind of results.  I’m sick of having to drag “conservatives” that we support and elect across the finish line with frantic calls and visits to Austin.

HB1398 was about finding out the veteran status of inmates. School Choice was number 7 on our list and over 70% of all voters agreed with it but EVERY Democrat and all but a handful of Republicans voted for Amendment 83.

You can read about that story from Texas Senate District 25 here.

Religious Freedom, Ending Child Gender Modification, Constitutional Carry, School Choice. All of these can gain us Republican voters from the independents and many Democrats.

What good does it do for us to champion great legislation that would grow the party and attract voters from across the aisle if our Elected Republicans do nothing to advance the agenda and pull backdoor votes to counter them?

If you have a RINO State Representative or Senator I am asking, begging you, to find a good candidate to run against them in the primary.

If you want to know how to do that read How to Bring Down a RINO.

Consider yourself for the job if you’ve never had a problem doing the right thing or voting the right way. Ask three friends what they think of you running, you might be surprised by their response.

We conservatives are a humble people, if others think more highly of you than you do of yourself, then you’re the candidate we need.

GOD knows the ones in office that think the most of themselves, also care mostly for themselves.

That kind of representation is literally killing Texans, we have better people that can do the job, they just have to be convinced.