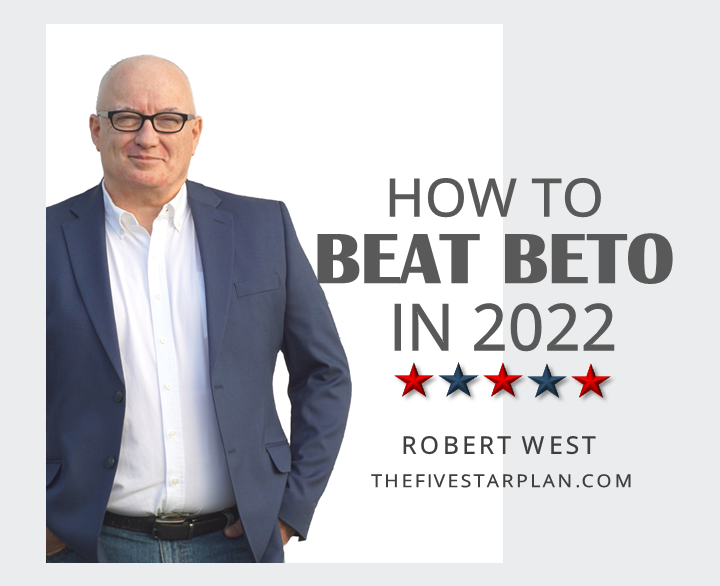 Tick Tok, as I write this, we have 129 days before people can file for Precinct and County Chair positions across Texas. These people will decide the future of the Great State of Texas…

If your current Precinct Chair or County Chair is too timid to take the actions required to censure Governor Greg Abbott, then replace them.

Run for these positions yourself.  Instead of complaining, act.

The First Step to Beating Beto

How do we beat Beto in 2022? The first step is to find someone, anyone, to win against him in the Republican Primaries.

Even better would be to get every County GOP to issue a censure against Greg Abbott and force the State Party to do the exact same thing.

Why is there such resistance to that second part? Because most people are cowards, some are cronies and none of us like admitting we have been fooled.

The good news is that every day, more and more patriots are stepping up. Patriots that last year were not “allowed” to teach kids how to swim because King Abbott decided one day that teaching kids how to swim was non-essential.

The next time you see the smiling face of a child who drowned ask yourself, “Was he scheduled for a swim class in 2020?”

People who were put out of work by this are now involved in politics.

I have met them.

Our suicide rate among children has seen a 500% increase. Isolated, fearful, in a world where they cannot even read facial expressions or be around friends.

All of this because of a virus that according to the stats is less dangerous to those 12 and under than lightning strikes.

How Do We Counter the Charge?

So how do we counter the charges that Beto will level against us in 2022?

Once the fear is gone but while we are still mourning the after effects of the lockdowns?

Don’t forget that 40% of small businesses were destroyed while the big box stores saw profits increase.

How do we respond when Beto, lays out the Constitutional Violations of Greg Abbott?

The Republican candidate, the one that beats Greg Abbott in the primary, should agree and go one step further.

Not a single person in Texas can argue that Greg Abbott didn’t violate the Texas Constitution in 2020. I would challenge anyone to try.

Under our state constitution Greg Abbott has ONE emergency power and that is to call a special session, yet he didn’t use it. He instead decided to issue imperial decrees like a monarch.

Our State Representatives allowed it, even though they could have corrected his executive overreach with a simple vote by calling their own special session. This was possible under the Texas Government Code, Title 6, Subtitle B, Section 665.

Not only did they do nothing in 2020, in the first 2021 legislative session, HB3 passed in the house with overwhelming numbers. Only four Republican State Representatives voted against this bill that would make Abbott a king in all but name.

So how do you beat the Democrats by agreeing with them?

The Democrats are not only going to say Abbott violated his oath to GOD, which is true.

They are going to say out loud the Republican State Representatives violated their oath by doing nothing, which is also true.

Remember, all the State Representatives will be up for election as well.

The next thing they are going to say is that the grassroot Republicans and the Republican voters were hypocrites for not calling out the unconstitutional actions of these people and replacing them in the primaries.

Whether this is true or not is still up in the air but it is not looking good right now.

We have 14 County GOP’s in Texas that have passed a formal censure of Greg Abbott. Those counties are listed on TFSP Resource Page. You can receive a copy of one of those censures in a free PDF when you sign up for TFSP newsletter.

More good news, we have two more Counties voting on censure this month.

Thank you for Subscribing!

Remember to Open Your Welcome Email

Have a Great day!

I want you to visualize our winning candidate in the General Election, they’re on the debate stage while Beto is waving his arms like a roadside attraction.

He levels the accusation that Greg Abbott violated the Texas Constitution at least 14 times.

Our candidate will answer. “Yes, he did. Greg Abbott did limit public gatherings, seized private businesses, treated people differently under the law, closed down the courts, bars, schools and churches.”

“Yes, Greg Abbott did put 3 million Texans out of work and closed all of our borders except the Southern one.”

“He violated the rights of all Texans, Republicans, Independents and Democrats and the reason he’s not on this stage and I am is that the Republican Party is not filled with hypocrites and liars.”

“The Republican Party of Texas is filled with the righteous that called out this behavior and acted to defend those rights.”

He will then ask Beto, “What did the Democratic Party do to protect those rights?”

That will be the winning message in the 2022 General Election.

Whoever stands up to protect the GOD given rights of all Texans, be it Republicans, Independents or Democrats will win the 2022 governor’s race with those words.

Either party can start at any time, Tick Tok…