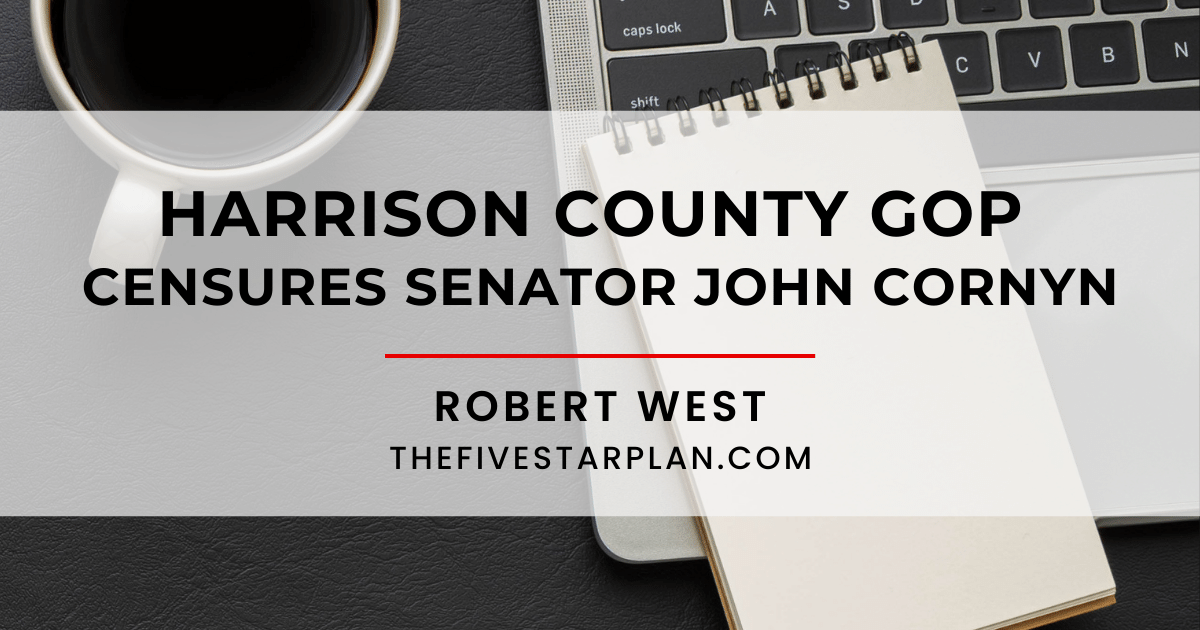 July 7, 2022, Harrison County passed a censure of Senator John Cornyn; the text was emailed to me the same night.

We have 30 plus counties that have reached out to do the same.  To learn more, I covered this in my podcast, watch Episode 15, Episode 16 and Episode 17.

It does not matter if they are cowards or cronies, they are not representing the Republican Party of Texas whose views were on full display for over 11 minutes at convention.

The time for being polite to people who trample our rights and ignore our voices is over, it is time to act.

Your party members who wish to sit quietly while the Constitution is ignored are no less guilty than the people who are doing it, call them out.

A Resolution of Censure of U.S. Senator John Cornyn III

WHEREAS, Senator John Cornyn III has demonstrated a pattern of action demonstrably opposed to the first, third, fourth, fifth, seventh, eight, and ninth Core Principles of the Republican Party of Texas (RPT) Platform, by repeatedly voting contrary to these Core Principles, and

WHEREAS, Senator Cornyn, being part of a small contingent of Republican senators who, in opposition to the vast majority of their fellow Republican senators including Senators Cruz, Lee, Kennedy, Paul, and others, repeatedly crossed over to vote with the Democrat majority in procedural (cloture) votes, as well as final votes of confirmation, of at least twelve presidential appointees, including the U.S. Attorney for Minnesota, multiple U.S. District Judges, Director of the Asian Development Bank, a Member of the Federal Election Commission, Undersecretary for Intelligence and Analysis, a U.S. Circuit Judge, and the General Counsel for the Department of the Treasury, and these actions violate the RPT’s third core principle, namely, preserving American and Texas sovereignty and freedom, and

WHEREAS, Senator Cornyn again crossed over with a small contingent, generally of the same Republican senators, to vote with the Democrat majority against a Motion to Proceed to S.Con.Res. 41, which was a concurrent resolution authored by Senator Rand Paul, setting forth the congressional budget for the United States Government for fiscal year 2023 and setting forth the appropriate budgetary levels for fiscal years 2024 through 2032, and this is a violation of the RPT’s fourth and fifth core principles, namely, limiting government power to what is enumerated, and personal accountability and responsibility, and

WHEREAS, Senator Cornyn was the lead Republican negotiator for a working group made up of 20 Republican, Democrat, and Independent senators, to work on gun control legislation, namely, S.2938, which subsidizes red flag laws, imposes additional restrictions on otherwise legal owners of firearms, expands background checks, and

WHEREAS, Senator Cornyn, after having betrayed these several Republican principles with this one issue, had the unmitigated temerity to try to convince thousands of Republican delegates at the 2022 RPT convention that he was working to protect the 2nd Amendment, and such subterfuge is a gross violation of the third and the fifth RPT core principles, of preservation of American and Texas sovereignty, and of personal accountability and responsibility, and

WHEREAS, Senator Cornyn’s history of crossing over and voting with the Democrat Party to accomplish their objectives has continued with yet another bill, namely, S.4402, introduced by Senator Cornyn, the text of which is also part of S.4384 by Democrat Senator Chris Coons, with Senator Cornyn and others named on it, which bill on its face seeks to foster increased civic engagement in the educational setting, and appropriates over $6 billion over the next 6 years to fund nonprofits and educational institutions to create and implement programs designed to accomplish those ends, and

WHEREAS, S.4384 authorizes the $6 billion in grant money to be disbursed by the Secretary of the Department of Education, for programs which accomplish the objective of “striking ‘traditional American history, free institutions, or Western civilization’ and inserting ‘American political thought and history, free institutions, the impact of American representative democracy and constitutional democracies globally, or the means of participation in political and civic life,’ and this is clearly an attempt to foster the imposition of critical race theory, and subsidize groups with other such non- or anti-traditional concepts of American exceptionalism, which erodes historically accurate portrayals of America’s foundation on, and contributions to, Western Civilization, and

WHEREAS, the U.S. House introduced this legislation in March 2021, and between the House and Senate there are 5 versions of this bill, but the operative bills are S.4402 by Senator Cornyn and S.4384 by Senator Coons, with Senator Cornyn is a co-sponsor, and with such commitment to this bill by Senator Cornyn, this is clearly a violation of the RPT’s seventh core principle, which calls for an educated population, yet with this bill, and the billions of dollars earmarked for organizations to “educate” children in an alternate version of American history, it is unconscionable to have Republican support, and NOW THEREFORE, BE IT

RESOLVED, that at the duly scheduled meeting held on July 7, 2022, and after having offered Senator Cornyn an invitation and opportunity to speak to these grievances, a quorum being present, and with a vote exceeding two-thirds present and voting, the Harrison County Republican Party does hereby CENSURE Senator JOHN CORNYN III, and be it further

RESOLVED, We request that the State Republican Executive Committee concur in this resolution of censure and impose on Senator John Cornyn III, the full set of penalties provided in Rule 44 of the Rules of the Republican Party of Texas; and be it further

RESOLVED, That an official copy of this resolution be prepared and transmitted to the Chairman of the Republican Party of Texas, and be it further

RESOLVED, That we, the Republican Party of Harrison County, in solidarity with Republicans all across both our county and our state, are stridently opposed to Senator Cornyn’s continued defamation of Republican principles, and we hereby demand his immediate resignation from the U.S. Senate for his faithlessness to our party and our principles, and be it further

RESOLVED, That we strongly encourage our fellow Republican Party County Executive Committees, Auxiliaries, and conservative groups across the state of Texas to pass this, or a similar resolution, in demonstration of the widespread dissatisfaction with Senator Cornyn’s lack of fidelity to our founding principles, our national and state constitutions, and the Republican Party of Texas, and to express the solidarity of Republicans statewide, in opposition to his continued status as our elected Senator.

I want to thank Lee Lester, Harrison County Chair for sending their resolution and allowing me to share it with all of you. Please use this censure as an example for your CEC.

My blog is also open to guest writers who would like to share their results.  We are highlighting the censure on the blog, my podcast and in resources.

Also note, many CECs are hiding behind the word, "biennium" this is their excuse to do nothing and the attempt to shut down this censure.  Read my response to that here.

Let me leave you with this, even if the measure doesn't pass in your county, it's time to expose the cowards and cronies within the GOP.

The Price of Liberty is Eternal Vigilance - Thomas Jefferson